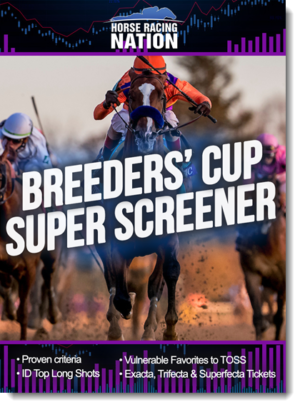 Like every Breeders’ Cup before it, this year’s 38th renewal was filled with scores and shockers. What happened in the Juvenile Turf was just unbelievable. I heard from so many of you that were holding the winning Pick 4 tickets we gave out that would have cashed had Modern Games not been eliminated from the wagering pools. Very frustrating to say the least.

Alright, on to something more positive. Let’s first check out how the Super Screener performed over the 14 Breeders’ Cup races. After that, we’ll share some observations and key takeaways that we can leverage for future Breeders’ Cup events. 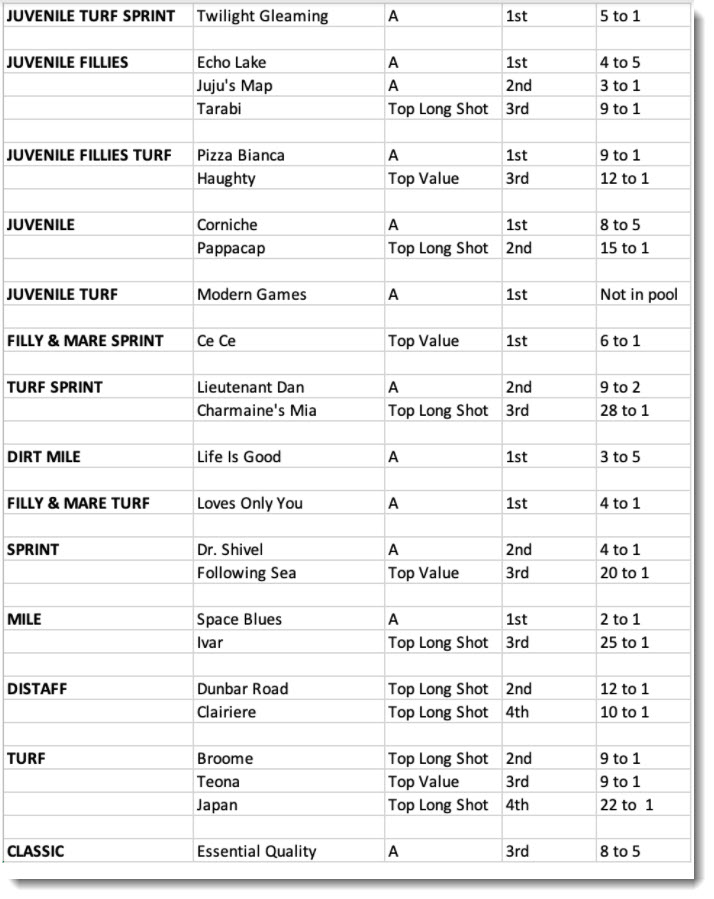 Godolphin/Charley Appleby – They came and they conquered winning the Juvenile Turf (Modern Games), Mile (Space Blues) and the Turf (Yibir).  With the exception of Yibir, we had the others pegged as prime win contenders…this combo is worth staying close to in future Breeders’ Cup events.

Wesley Ward – He remains the king of Turf Sprints taking both the Juvenile Turf Sprint and the Turf Sprint in wire-to-wire fashion.  Twilight Gleaming was our strongest win conviction play over the weekend and he scored at 5-1 in the Juvenile Turf Sprint.  We faded Golden Pal in the Turf Sprint assuming he would be challenged early, which never materialized, but we wisely included him on top in a winning Trifecta ticket.  A key learning with Ward is, if he has multiple horses entered in these turf sprint races, pay extra attention to the one that Irad Ortiz Jr. is on as he was rider for both of Ward’s winners.

Japanese Imports – Great to see Japan participate in a big way in this year’s Breeders’ Cup bringing over 7 horses with two of them winning including the big 50-1 bomb Marche Lorrine in the Distaff pace collapse race and the very logical and top Super Screener pick, Loves Only You in the Filly & Mare Turf. Some key takeaways…the speedy male dirt horses, trained primarily  by Hideyuki Mori, made no impact at all other than some early pace factor in their respective races. We’ll certainly give the most respect and consideration to any stamina-rich fillies and mares trained by Yoshito Yahagi (trainer of both Japan winners) in the future.

Double Top – This critical Super Screening screening criterion held up for yet another year. The one big knock we had on Art Collector is that in his final two preps for the Classic, he scored double career tops. That has been a key eliminator of low-priced horses for the win over many years now.

Speedy 3-yr-old Filly – We faded Bella Sofia in the Filly and Mare Sprint because in past races, 3-yr-old fillies that are coming off huge pace and race tops will flop in this race as one of the favorites…and she did just that finishing 2nd to last at odds of 5-2.

Top Last Out – For whatever reason, a top last out in the Turf Sprint is almost an automatic eliminator now.  Gear Jockey was a highly respected potential board hitter but he was one of the few horses in the field that scored a lifetime top last out and he ended up finishing mid-pack.

Brown Under – Even when Chad Brown doesn’t win Breeder’s Cup races, his charges, even at high odds, regularly hit the board in the races and especially the turf races. Something to keep in mind when it comes to ticket building.

Inside – Race after race on the turf at Del Mar pointed to the need to stay on or near the rail (regardless of post draw) until at least the field fans out for the turn.  If you were on the outside throughout, it was tough to impact in these races.

Our many thanks to our long-term and new subscribers!  You are what makes the Super Screener possible and can’t tell you how much we appreciate your patronage. For those newer to the Super Screener ,not sure if you were aware that we do this every week! We would love to have you join team Super Screener year round.  Just go here to learn how you can get the insight-packed Super Screener sent to your inbox every week.

Hope you enjoyed a super Breeders’ Cup weekend and would love to hear about some of your big scores you landed over the weekend.

Until this coming weekend…go fast and win!